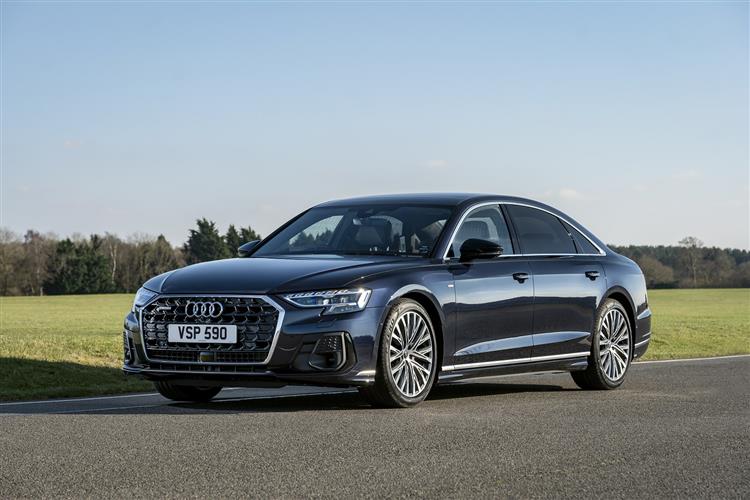 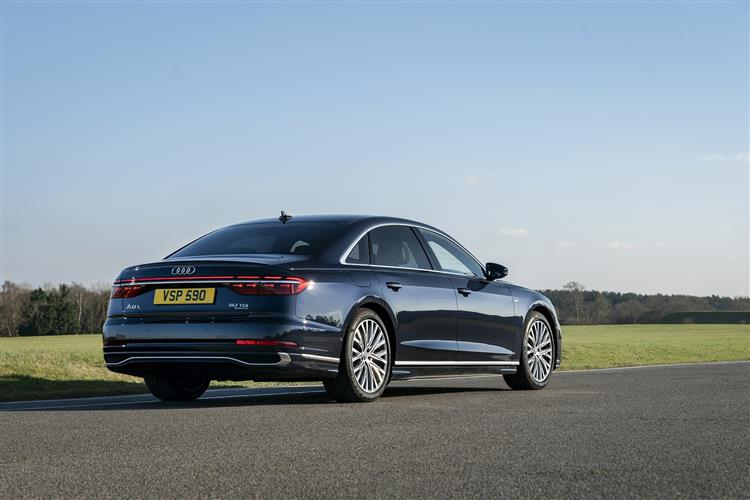 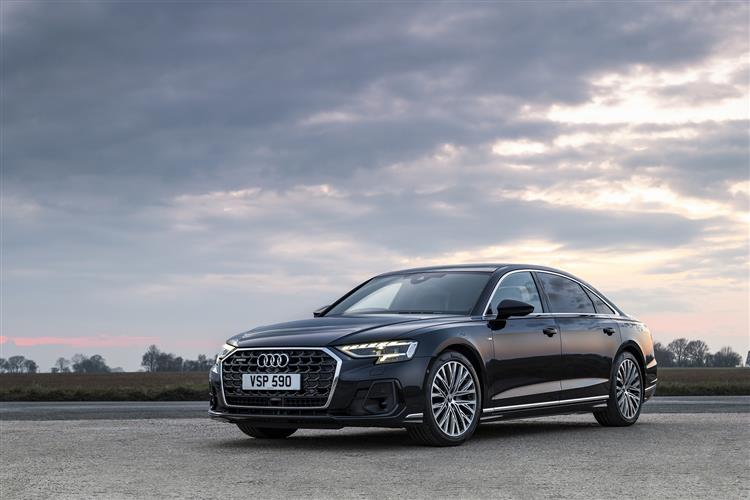 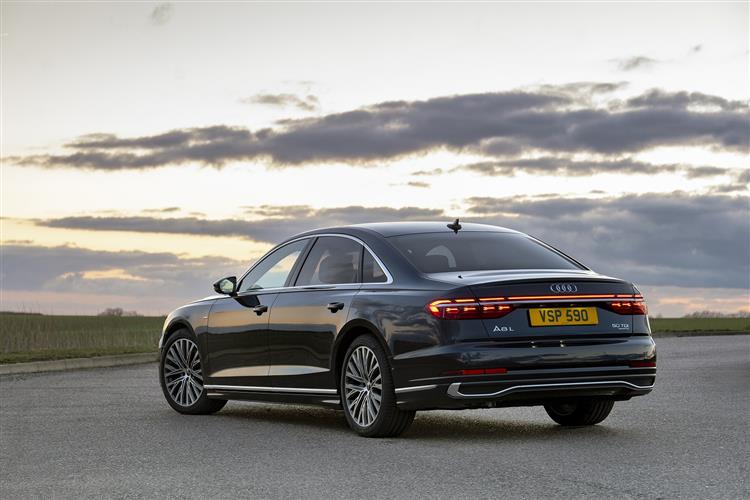 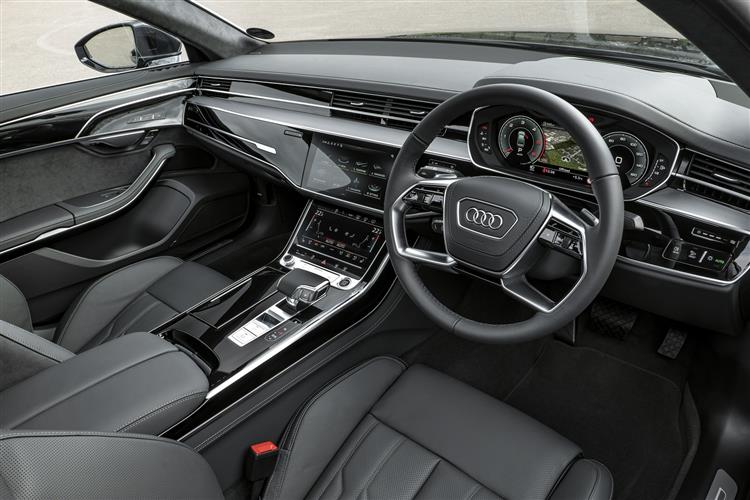 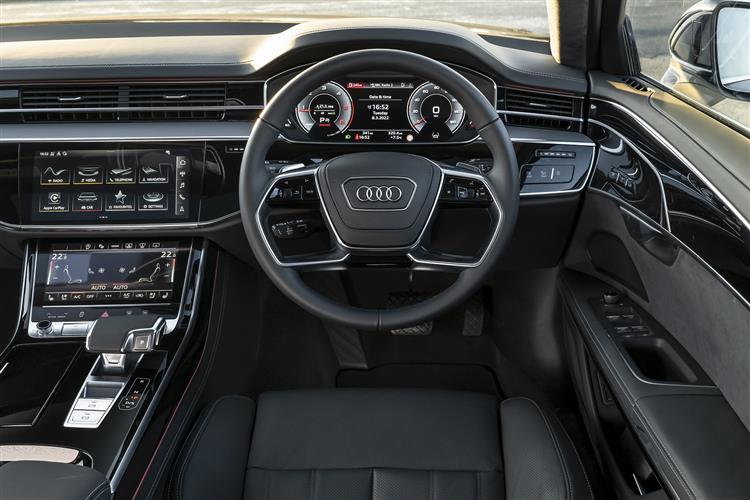 Audi's A8 has long been the big saloon to choose if discretion and understatement work for you. Is that still the case? Jonathan Crouch looks at what's on offer from the revised version of the fourth generation design.

Audi is used to winning. It's got extremely good at it, continuing to push technological boundaries wherever it can to stay a step ahead of its rivals. And the best place to see Vorsprung Durch Teknic at work? Well it has to be here doesn't it, with the brand's top A8 large luxury saloon, further improved in this evolved fourth generation form. It's hard to remember now, but prior to this A8's original launch back in 1994, Audi wasn't really considered a fully-fledged prestigious brand. Its cars generally languished in the corner of your local Volkswagen dealer's showroom and appealed to those who couldn't quite stretch to the products of the smarter German makers. The first generation A8 changed all of that, a car the like of which the luxury segment had never seen before. Aluminium spaceframe technology from NASA. 4WD quattro technology from the World Rally Championship. And exquisite standards of build quality that redefined what boardroom buyers could expect from a European luxury car. At a stroke, it put posh rivals on the back foot - and Audi has never looked back since. The second and third generation A8 saloon merely perfected the recipe, but this MK4 'D5'-series model, first launched in 2017, took a real step forward once again. Has Audi further perfected it in this facelifted form? Let's find out.

The array of engines you get in the latest A8 is pretty mouth-watering and as before, everything's mated to 8-speed tiptronic auto transmission and quattro 4WD. As before, the mainstream line-up is based around two V6 turbo engines. Either a 3.0 TDI diesel (in the 50 TDI) with 286PS: or a 3.0 TFSI petrol unit (in the 55 TFSI) with 340PS. A 60 TFSIe quattro PHEV variant is also offered, this derivative mating a 3.0 TFSI petrol engine with an electric motor to achieve a 462PS output and 700Nm of torque. The 60 TFSIe now has a much larger 14.4kWh battery for a longer all-electric driving range and goes from rest to 62mph in just 4.9s. The other option is the S8, which uses a 571PS 4.0-litre petrol V8 and generates 800Nm of torque. The S8 sprints to 62mph in just 3.8s. On the move, dynamic all-wheel steering complements the standard quattro permanent all-wheel drive system and buyers also get Audi AI active suspension, a fully active suspension set-up. Depending on the driver's wishes and the driving situation, it is capable of raising or lowering each wheel separately with electric actuators. This newfound latitude enables it to deliver the polished ride comfort of a classic luxury saloon and the taut, composed agility of a more driver-oriented performance car in equal measure. It's clever. It's an Audi. What else did you expect?

This fourth generation A8 signalled the beginning of a new design era for the entire brand and this revised model aims to continue that visual evolution. To that end, there's a larger Singleframe front grille, a restyled front bumper, smarter side skirts and a sleeker rear valance at the back. The LED headlamps are also restyled - and can be upgraded to Audi's latest Digital Matrix LED status where each light unit contains 1.3 million micro mirrors. The smarter rear lights meanwhile, have a built-in proximity sensor which activates them if a following vehicle gets too close. As before, two bodystyles are available, the 5.17-metre 'standard' version and the A8 L, which has a 13cm-longer wheelbase. Inside, occupants can also now relax in even more sublime surroundings, with every detail radiating superlative bespoke quality - from the perforation in the seat upholstery to the electrically opening and closing shutters on the air vents. Up-front, the instrument panel is largely free of buttons and switches. As before, there's a 12.3-inch Digital Cockpit instrument screen, plus two centre monitors, a 10.1-inch one for the media functions and a lower 8.6-inch unit just for the climate controls. All three screens now run on updated software. As ever, the most sought-after seat in this Audi flagship model could quite possibly be the rear left - the optional relaxation seat in the A8 L that comes with four different adjustment options and a footrest. In this seat, the passenger can warm and massage the soles of their feet on a unit with multiple settings incorporated into the back of the front-passenger seat.

Prices start at just under £75,000 - add £4,000 if you want the lengthier long wheelbase bodystyle. There are two main trim levels, 'Sport' and 'S line', then top 'Black Edition' for standard shape models and 'Vorsprung' for long wheelbase models. At the top of the range, the S8 costs around £103,000. Across the range, there's an improved "Hey Audi" voice control system and media connectivity is now served by a faster MIB 3 software system. Plus online and Car-2-X services from Audi connect augment the navigation system. Unlike in an S-Class, you can add rear seat screens - two 10.1-inch HD monitors attached to the front seat backs. Standard drive tech includes the 'Tour' assist package, which includes adaptive cruise assist - this adjusting longitudinal and lateral guidance throughout the vehicle's speed range. The optional 'City' assist package includes intersection assist, cross-traffic assist, side assist, exit warning, and the Audi pre sense 360?? safety system, which induces a side crash enhancement in combination with the active suspension. As before, there's also an optional 'Park' package, which includes remote park assist. This can autonomously steer the A8 into and out of a parking space or a garage, while the manoeuvre is monitored by the driver standing outside the car, controlling things via his or her smartphone and the myAudi app. It broadcasts a live feed of the parking manoeuvre taken from the car's 360-degree cameras onto the owner's handheld device for easy monitoring.

All the conventional A8 engines operate in conjunction with a belt alternator starter, which is the nerve centre of the 48-volt electrical system. This mild hybrid technology enables the car to coast with the engine switched off, and to restart smoothly. It also has an extended start/stop function and an energy recovery output of up to 12kW. The combined effect of these measures is to improve efficiency substantially. Let's get to the WLTP figures. The 50 TDI diesel delivers up to 40.9mpg on the combined cycle and up to 180g/km of CO2. The 55 TFSI petrol version manages up to 28.8mpg and 223g/km. For ultimate efficiency though, you'll want to talk to your Audi Centre about the A8 60 TFSIe quattro version, which uses a powerful plug-in petrol/electric hybrid drivetrain. Depreciation in this sector is traditionally severe, especially where the more expensive models are concerned, but Audi residuals are usually strong.

We're in no doubt that this is the kind of car Audi should be making. The brand built its reputation on technology, then fell back on stylistic design and cool marketing to sell its products. This fourth generation A8 signalled a welcome change of direction - and this improved version continues that evolutionary trend. Of course, there are always going to be those who'll prefer the heritage and elegance of a Mercedes S-Class. Or the slightly more dynamic demeanour of a BMW 7 Series. We also think that both of these rivals make a slightly more distinctively upper-class statement - though you may disagree. The whole point though, is that an A8 ought to be a more futuristically modern boardroom conveyance - which is the kind of experience the enhanced version of this MK4 model sets out to offer. Whatever your perspective, it's a formidable Luxury segment contender and a fitting showcase for Audi's most advanced engineering. But is it a car that you could bond with, a luxury conveyance to love as well as admire? The answer depends upon the owner of course. Some may still see this A8 as being a little remote compared to a status-conscious Mercedes or a proudly opulent BMW. We're guessing though, that a small but significant number of boardroom buyers might now find this Audi a surprisingly complete all-round choice, were they to be minded to consider one. Hugely capable, innovative and beautifully built, this is the car that rivals always feared Audi would build. And if you're in this market, it's one you need to try.