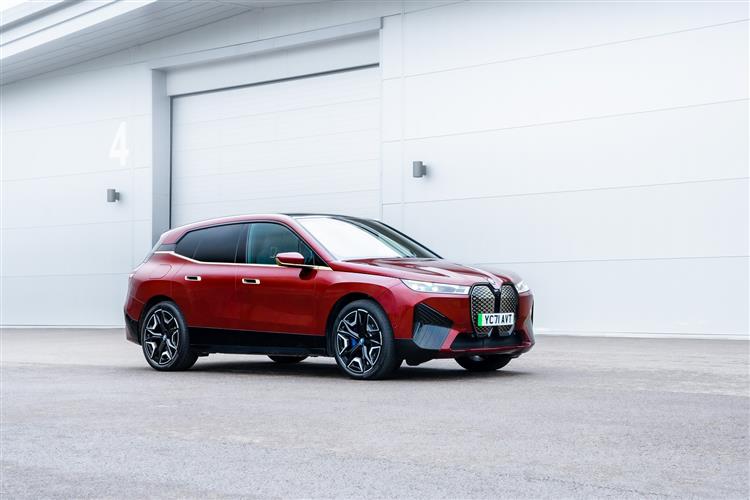 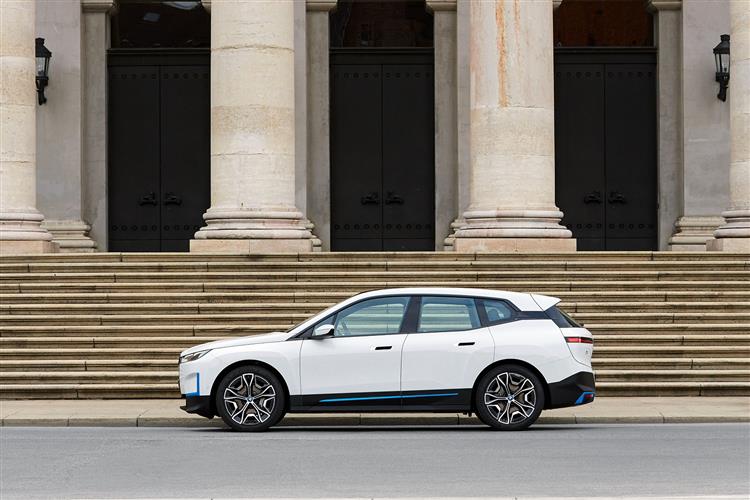 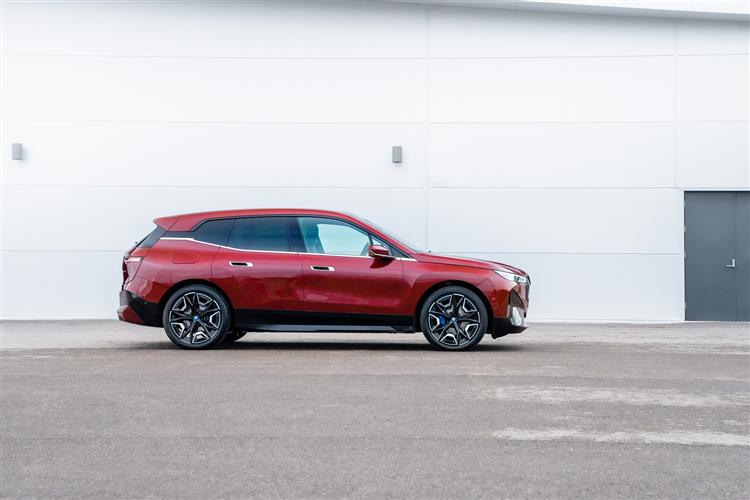 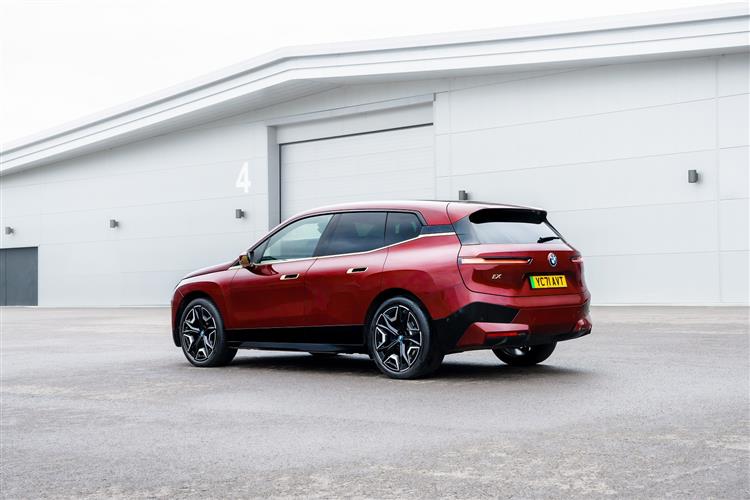 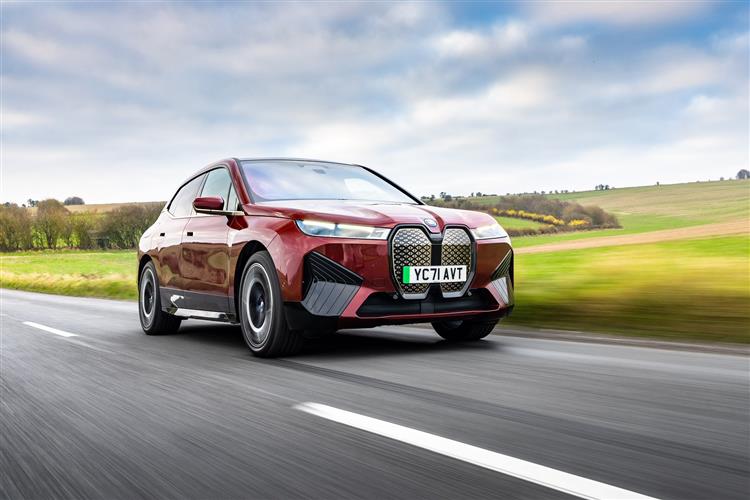 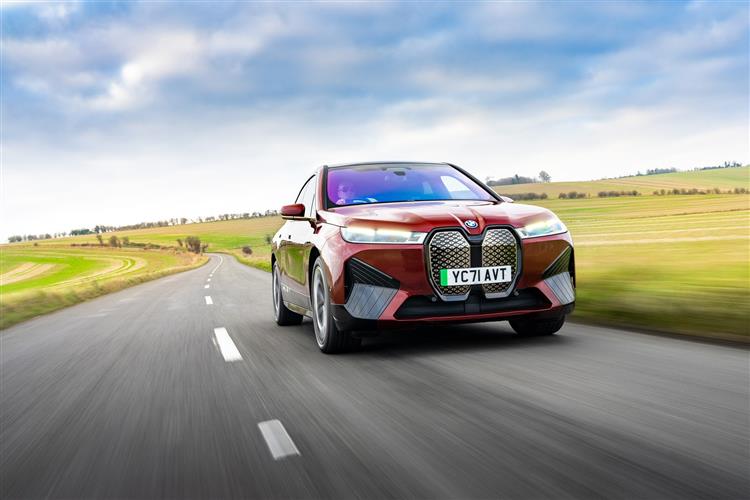 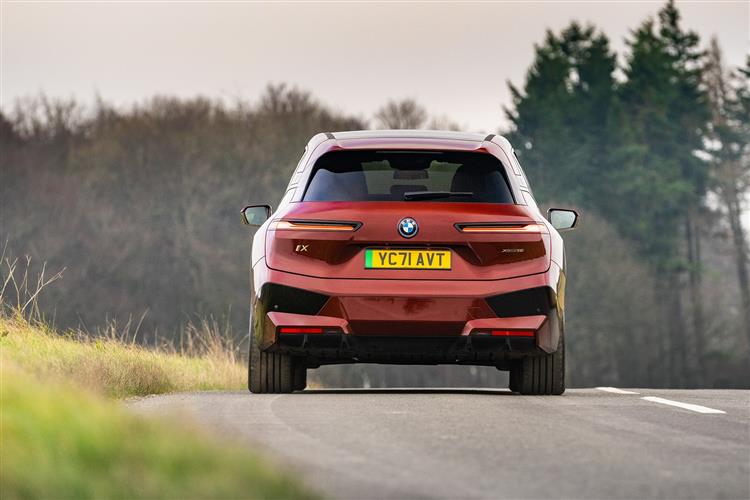 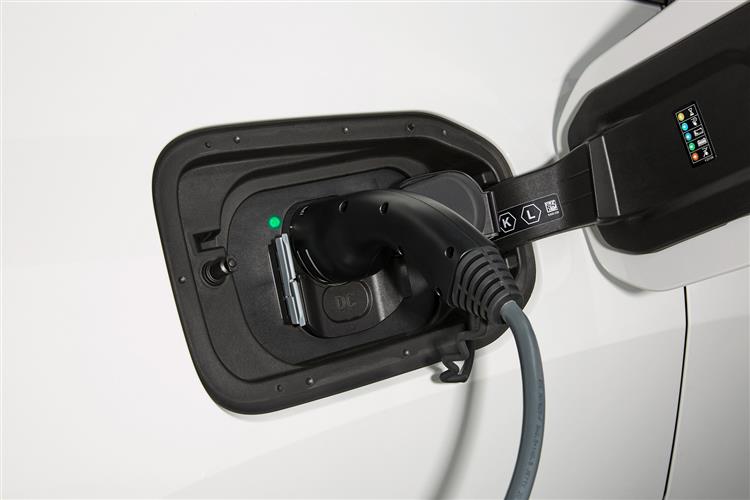 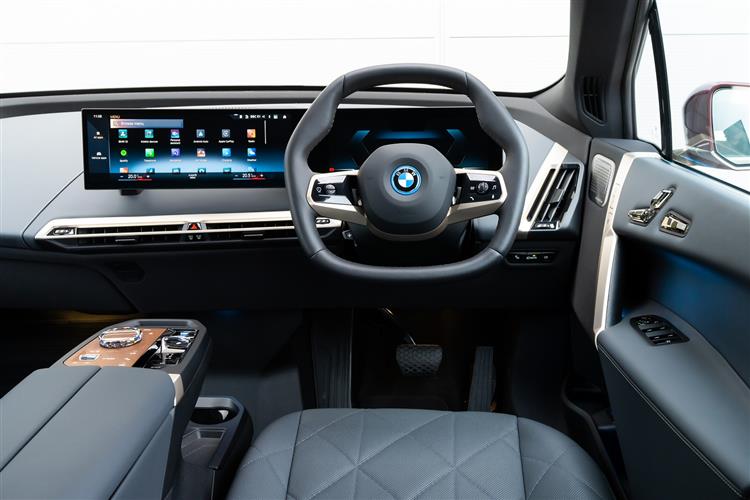 BMW's all-electric model line-up, for years solely carried by the little i3, is now taking shape. We've already been introduced to the i4 sports saloon and the iX3 mid-sized SUV. And beyond that, there's this car, the iX, a large luxury SUV which the Munich maker hopes will move the game on from the standards already set in this segment by direct rivals like the Audi e-tron and the Mercedes EQC. The company claims the iX to represent the pinnacle of its electrification strategy. It's certainly the brand's first 4WD EV, it uses the fifth generation of the Bavarian maker's e-motor and battery technology and the carbonfibre-rich structure is more innovative than anything we've seen from the company since the i3. But there's still plenty of conventional design from combustion models in the 'CLAR'-influenced platform. And there's no sign here of the advanced 800-volt fast-charging infrastructure that you'll find on top VW Group EVs. Despite all that, you'll certainly feel that you've got the market's most advanced luxury EV if you own one of these - when you look at it in your driveway or slip inside the futuristic cabin. But does it - will it - work as an ownership proposition? We'll see.

There's a choice of three iX variants, all using the same twin-motor four wheel drive configuration. Things kick off with the iX xDrive40, which has 326hp, a 71kWh-plus battery pack with a 257 mile range and, when driven less frugally, a rest to 62mph time of just 6.1s on the way to 124mph. The alternative iX xDrive50 flagship model has 523hp, a 105.2kWh battery pack with a range of up to 380 miles and can get to 62mph in 4.7s en route to the same top speed. The summit of the iX range is marked by the M60 version, which uses the same bigger battery as the '50'-series model but mates it with an even more powerful 619hp electric motor total output, delivered with up to 1,100Nm of torque. The range reading - 357 miles - is still acceptable and 62mph flashes by in just 3.8s on the way to an electronically limited maximum of 155mph. BMW wants to set a fresh handling standard for large luxury EV Crossovers in this class, so great efforts have been made to trim weight from the aluminium-intensive chassis, which features double wishbone (front) and multi-link (rear) suspension and can offer active rear wheel steering. On the move, there are 'High', 'Moderate' or 'Low' Brake Energy Regeneration settings. Plus activating driving position B with the selector lever generates so much off-throttle retardation that you'll virtually never have to use the brake pedal except when coming to a standstill. Using the alternative 'Adaptive' regen setting, the iX can also manage its own levels of brake recuperate to charge its battery on the move. When approaching a junction for example, the degree of recuperation will be increased. On the open road meanwhile, the coasting function sees the car 'freewheeling' with no drive power whenever the driver takes their foot off the accelerator.

From the pictures, it's quite hard to see where, size-wise, the iX fits into the SUV market, so it might help to know that the external dimensions are pretty similar to those of a BMW X5. Clever EV drivetrain packaging and a long wheelbase though, mean that interior cabin space is closer to that of an X7, though no 7-seat option will be offered. The styling, previewed by the company's 'Vision iNext' concept of 2018, is characterised by the lack of profile panelwork creases, plus there are frameless doors and a tapered glasshouse with an angled rear D-pillar. Because there's no need for a radiator, the front grille houses the drive assistance system's cameras, radars and sensors. For the first time in a modern BMW, there's a fixed clamshell bonnet; that's because without an engine or any front storage space, there's no need for customers to ever open it. Under the skin, there's a unique-to-the-iX all-aluminium spaceframe chassis that's also fashioned from 'CFRP' 'Carbon Fibre Reinforced Plastic'. Inside, there's an airy, futuristic-feeling cabin characterised by a flat floor, recycled materials and a rather odd-looking hexagonal multi-function steering wheel. The instruments and infotainment functions are grouped together in a curved digital display. And there's no centre console, the main controls instead (a rocker to select the drive and an iDrive infotainment dial) set within the forward part of the high-set central armrest. Space in the back is generous, with lots of head and leg room. Boot space is similar to the 650-litre capacity you get in an X5.

From the launch of this iX in late-2021, BMW was asking from around £70,000 for the entry-level iX xDrive40 'Sport' version of this car, that model available in plusher 'M Sport' form for £3,000 more. In both cases, you get a 71kWh battery, a 326hp total output and a 257 mile driving range. Ideally though, you'd want to stretch to one of the bigger-batteried iX xDrive50 models, priced in base 'Sport' form from around £92,000; again, it's £3,000 more for 'M Sport' trim. With those '50'-series variants, you get a 105.2kWh battery, a 523hp total output and a 380 mile driving range. The same bigger battery features in the top iX M60, which is in a price league of its own, costing around £112,000. It offers 619hp and a 357 miles of driving range. The iX has more computing power for data processing than any other model in BMW's line-up. Included is over-the-air functionality via 5G, which means that over-the-air updates can be uploaded into the iX during the customer's period of ownership. That system will also be used to progressively update the car's Level 3 autonomous driving technology. Full-LED lights are standard, though buyers will also be able to specify Laser lights as an option. Wheel sizes are similar to those of the X7, so the iX offers up to 22-inch aerodynamically optimised rim sizes and 275/40 profile rubber. An optional 'Sport' package gives you aerodynamically optimised 21-inch light-alloy wheels in a double-spoke design with Midnight Grey finish, plus Sport brakes with blue-painted calipers. There's also an optional 'BMW Individual Exterior Line Titanium Bronze' finish available as an option, with selected colour accents that lend the iX a particularly exclusive aura. With this, the three-dimensional structural elements within the BMW kidney grille, the door openers, the lower edging of the side windows (which extends into the D-pillar) and the inserts in the outer areas of the rear apron all gain surfacing in Titanium Bronze.

We'll re-state the range figures we gave you in our 'Driving Experience' section. The iX xDrive40 delivers a claimed WLTP-rated range of up to 257 miles per charge from its 71kWh-plus battery pack. The iX xDrive50 model meanwhile, has a bigger 105.2kWh battery pack that boosts range to 380 miles. With the M60, it's 357 miles. In a bid to keep weight down, the Munich maker BMW has optimised driving range by increasing the energy density of the batteries used, rather than increasing their size. What about charging? Well the xDrive40 can replenish its battery at speeds of up to 150kW, which, the brand claims, is fast enough to gain more than 56 miles of charge in around 10 minutes. The xDrive50 has 200kW charging capability that'll deliver 75 miles of driving for every 10 minutes of charging. Both iX variants, the Munich maker says, can be charged from 10% to 80% capacity in under 40 minutes and on average, use around 21kWh of electricity per 62 miles travelled. Over an ownership period of 125,000 miles, BMW claims that the iX xDrive40 will have a 45%-lower global warming potential than that of a comparable diesel model. And the brand is seeking to enhance the sustainability of its supply chain and increase its use of recycled materials for the iX. All of which will help to cut production emissions by 18%.

The game moves on quickly at the top of the EV segment. It seems like only yesterday that we were marvelling at the sophistication of large EV crossovers like the Audi e-tron and the Mercedes EQC. And, just as they moved on the standard originally set by Tesla, so the BMW iX shows just how much more is possible with a car of this kind. It's more spacious than its rivals, more futuristic inside and out and goes further on a single charge. Plus its slightly lighter weight (a relative term in a 2.5-tonne SUV) means it will handle a little better. In half a century, we'll still look back at cars like this as dinosaurs. But right here, right now, for the extremely well-heeled family EV fanatic, this is where it's at.