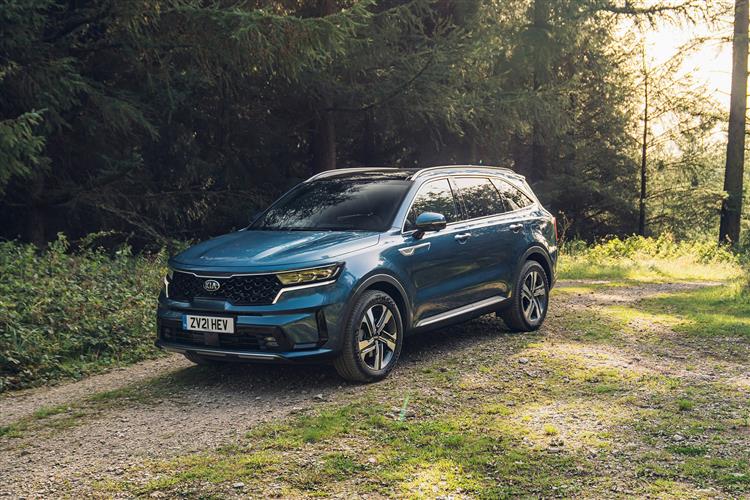 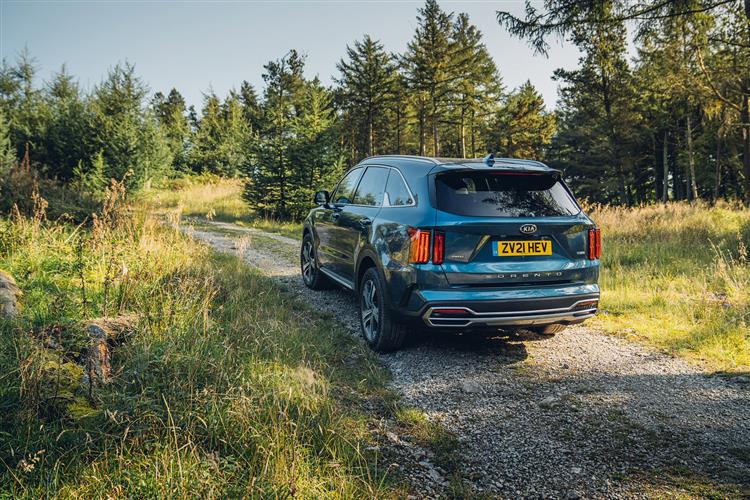 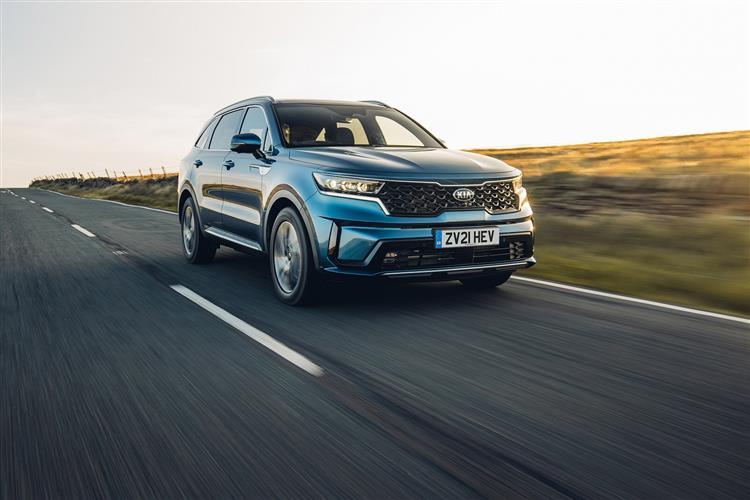 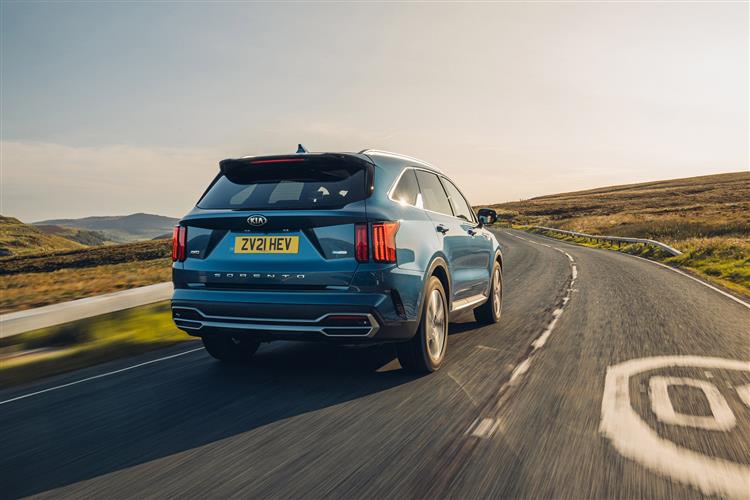 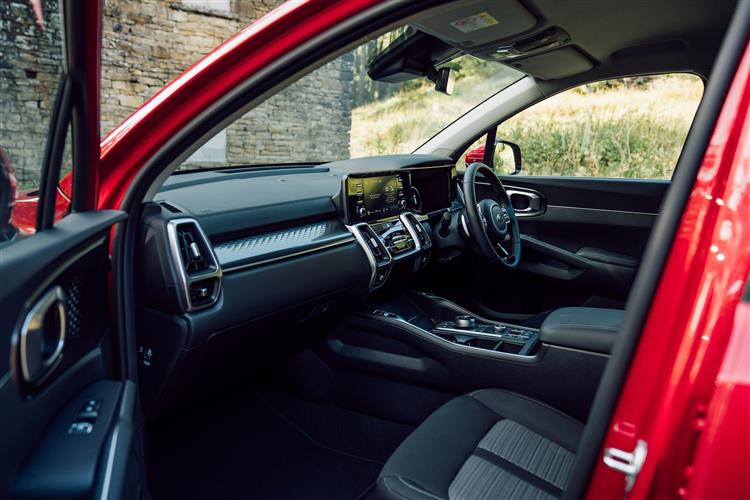 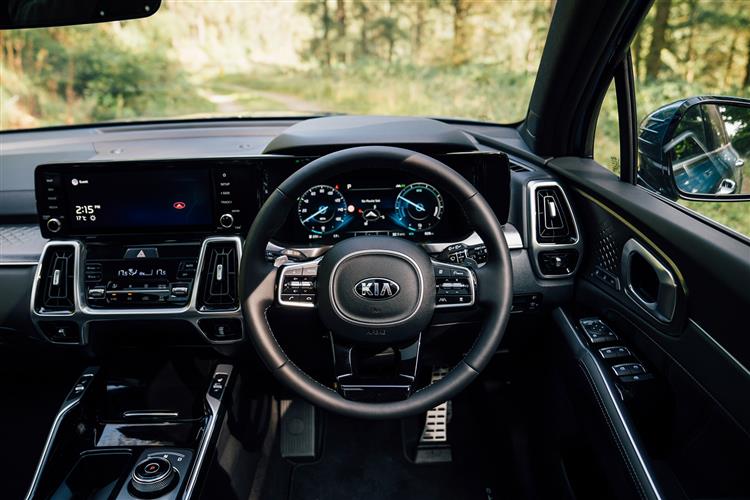 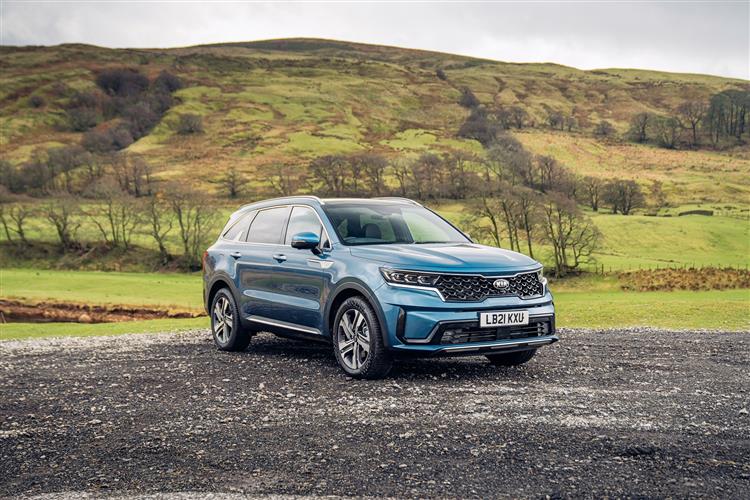 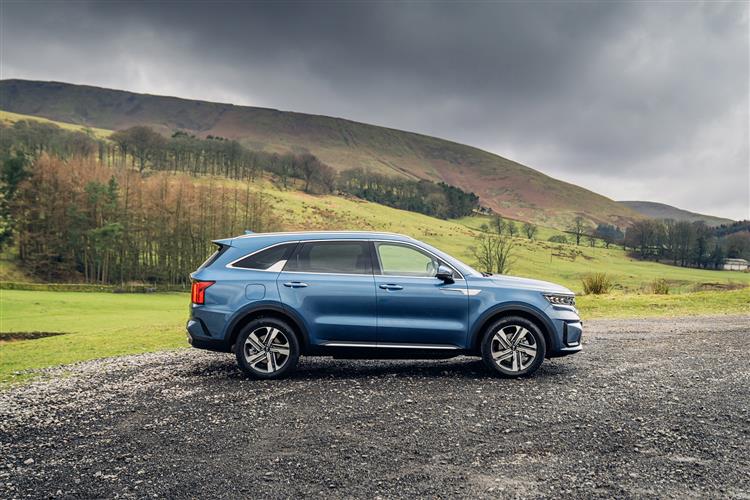 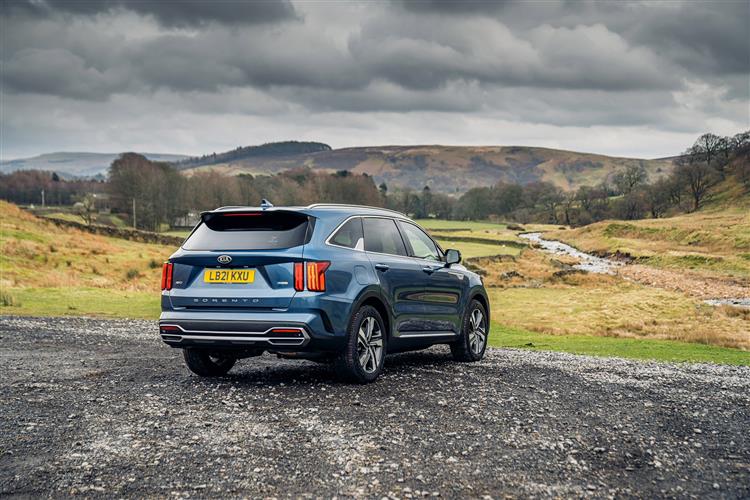 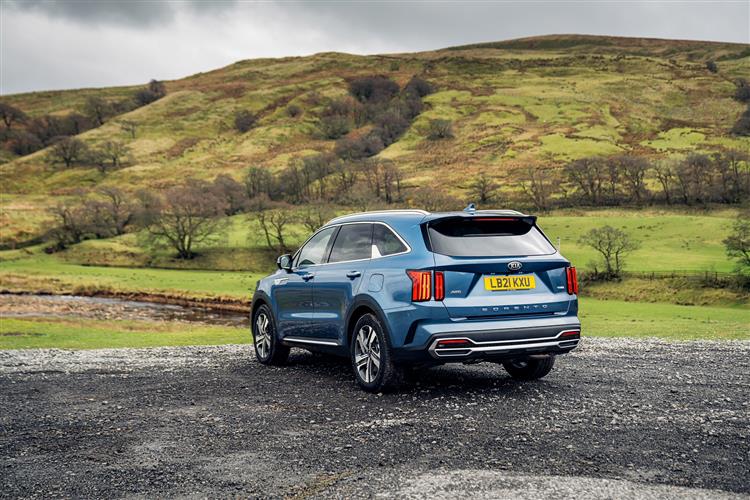 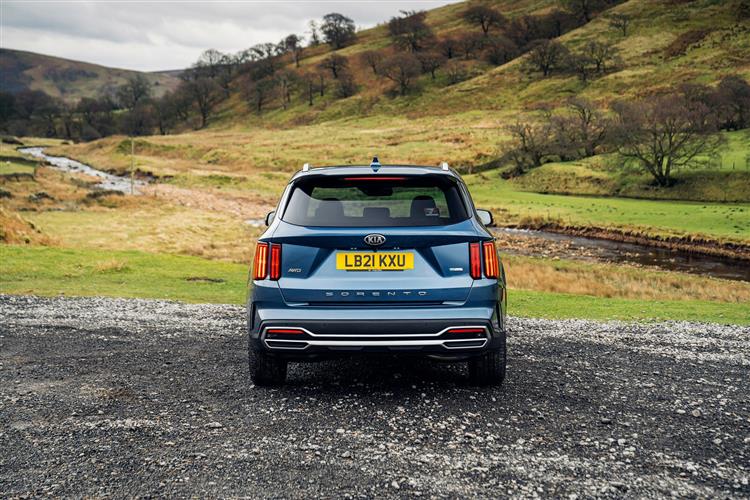 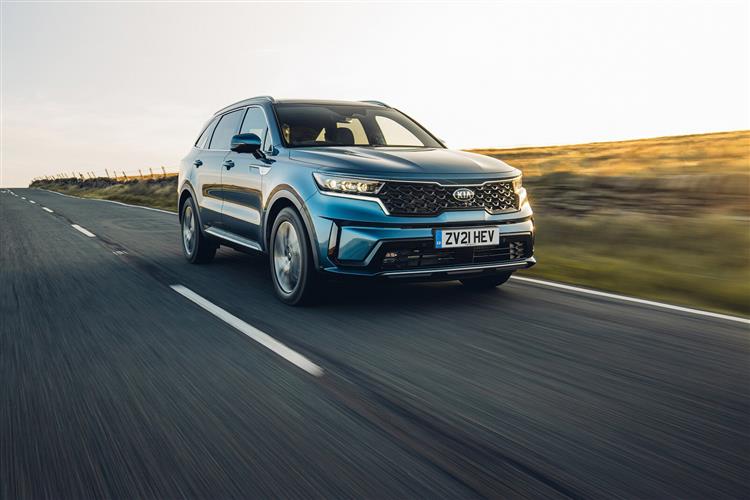 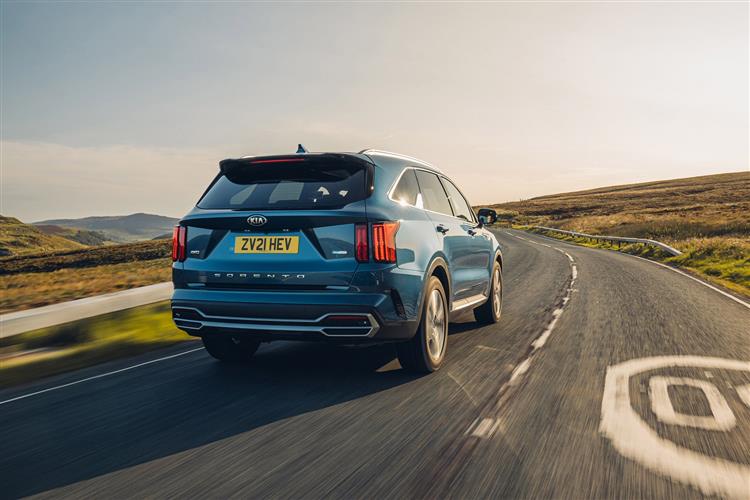 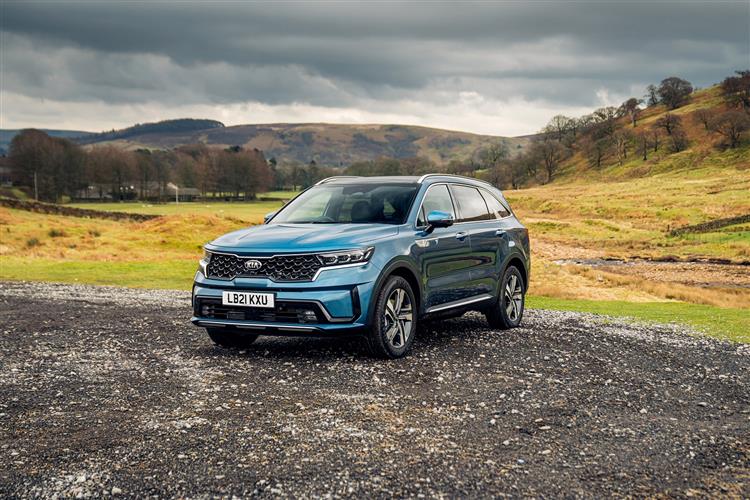 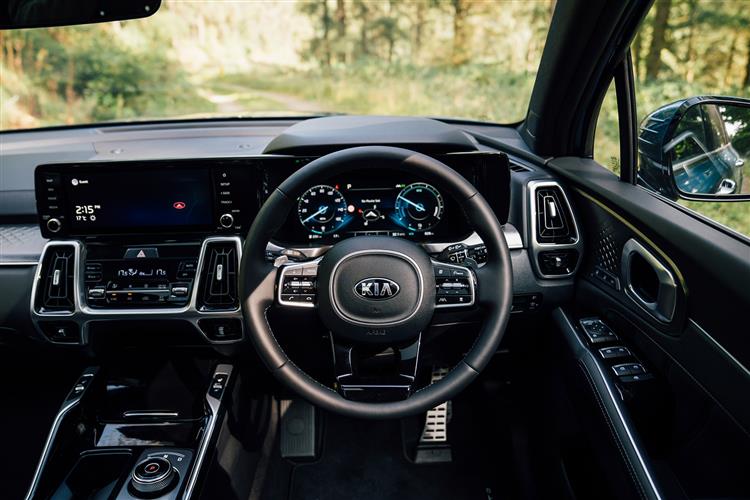 We're told that electric cars are the future. But family customers have to live in the here and now. And in in the here and now, it's quite simply very difficult to justify an EV that gives you range anxiety over anything but short-to-medium distances. It's also extremely difficult to find an EV with seven seats. A far more sensible solution that'll still probably see you driving largely on full electrification is this car, the Kia Sorento PHEV. There are a number of mid-sized-to-large family-shaped Plug-in hybrid SUVs on the market, so why this one? Well, a number of the PHEVs in this segment can't be had with seven seats, a failing this Kia avoids. And most of them are more expensive too, including this car's mechanically-identical cousin, the Hyundai Santa Fe PHEV. Not that this Kia is exactly cheap; you could easily find yourself paying £50,000 or more for a well specified one. You probably never imagined yourself paying that much for a Kia Sorento. But could you justify such a spend on this one? Let's find out.

On the move, this PHEV plug-in model's 90hp electric motor does a reasonable job of powering the car in battery motion mode and when the 13.8kWh battery pack runs out (after about 35 miles) and the 1.6-litre T-GDi turbo engine cuts in, the combined power output - 261bhp - is more than enough for most safe overtakes, or pressing on when you're late for the school pick-up. 62mph occupies 8.4s en route to 119mph; you certainly wouldn't want to go any faster than that in a car like this. You might wish for a bit more pulling power through the six speeds of the drivetrain's auto gearbox though; there's only 350Nm of it, which isn't a great deal to propel along a 2.1-tonne 7-seat family SUV. That's why towing capacity is limited to 1,500kgs. This car still retains a reasonably degree of 'off piste' capability though. Its standard 4WD system incorporates three bespoke 'Terrain' drive modes which you select from this centre console dial - 'Snow', 'Mud' and 'Sand'. But there's not really enough ride height to venture anywhere too gnarly with this Kia, so the 'Terrain' side of the drive mode dial will probably remain largely unused. More everyday useful settings come when a push of the same dial clicks you in to three separate tarmac 'Drive' modes that alter steering feel, throttle response and gear change timings. Most of the time, you'll leave the car in the 'Smart' setting, basically an auto mode that sorts everything out for you. There's also an 'Eco' mode. And a 'Sport' setting for when you want to push on, though you won't want to do that terribly often in this kind of high-sided SUV.

There are no outward giveaways as to this model's plug-in status, unless you happen to notice the badging or the extra filler flap. Previous generations of the Sorento have been a little anonymous and forgettable, but this fourth generation design is out to rectify that. In profile, you get a sense of the continuing growth that's characterised the Sorento model line throughout its various generations. This MK4 design is 5mm taller and gains another 10mm of length. The cabin quality on show here is certainly a big step forward from anything we've ever seen from Kia before and we think most customers will really like the way the high-set driving position that offers you such a commanding view of the road ahead. One of the first things you'll notice is that the instrument binnacle now features a single 12.3-inch screen with two virtual dials and a customisable information section in between. Anything this display can't tell you will probably be covered off by the infotainment monitor that flows out of the instrument binnacle to top the centre stack. This would be 8-inches in size with base '2'-spec trim, but with the two more opulent trim levels, you're favoured with a preferable 10.25-inch touchscreen display. In the second row, as usual in a 7-seat SUV, the bench slides back and forth and the backrest reclines, allowing second row folk to prioritise either their leg room - or that of those behind. SUV Plug-in rivals don't always offer a third seating row, but you get it here, though the relatively high floor height means that, as with most cars in this class, you sit rather with your knees up towards the level of your stomach. Otherwise, it's reasonably comfortably right at the back by class standards, though adults won't want to be confined there for too long. The boot, meanwhile, offers 179-litres of space with all the seating rows in place, 604-litres with the 3rd row folded and 1,988-litres with the second row flat.

At the time of this test in Summer 2021, pricing for the 261bhp Sorento PHEV started from just over £45,000 - that's for the base '2'-spec model we tried. Mid-range '3'-spec cost just over £49,000, with top '4'-trim at around £53,500. These prices represent a premium of nearly £6,000 over a self-charging 226bhp HEV hybrid version of this model. Which is a lot - but not as much as some rivals are charging. A Land Rover Discovery PHEV costs around £5,000 more. PHEV versions of other rivals look cheaper but are usually smaller, less powerful and often lack seven seats. If, having considered all of that, you conclude that it is a Sorento that takes your interest, then you're going to need to know just how generous Kia has been with the standard spec. Well, let's see. As well as all the features we've mentioned already (4WD, 7 seats and auto transmission), all models include 19-imnch wheels, LED headlights, roof rails, rain-sensing front wipers, electrically folding exterior mirrors, Smart cruise control with Stop & Go functionality and Kia's 'Terrain Mode Select' drive mode system. Plus a wide range of camera safety features that we'll brief you on in a moment. Standard cabin items include a 12.3-inch digital instrumentation cluster screen, heat for the front seats and steering wheel and dual zone climate control with air-conditioning for the third row of seats, plus an auto-dimming rear view mirror and a reversing camera to assist the all-round parking sensors.

If you're comparing the PHEV Sorento with its HEV self-charging Hybrid showroom stablemate, you'll find that this Plug-in variant's provision of a larger 90bhp electric motor powered by a considerably larger 13.8kWh battery makes all the difference. It facilitates the usual PHEV three-figure combined economy reading - in this case 176.6mpg. And an enviro-conscious C02 figure of just 38g/km. Which in turn makes possible a super-low Benefit-in-Kind taxation rating of just 11%; with the HEV, it'd be either 35 or 37%, depending on trim. Pretty much the same as a Sorento CRDi diesel. For a Sorento PHEV owner, there'll also be no VED road tax to pay in year one; with the HEV, it's £545 - and £895 for the equivalent diesel. Depreciation levels are class-competitive too: after three years and 60,000 miles, industry experts reckon a Sorento PHEV with base '2' trim will still be worth £18,200. A big draw with any new Kia is the comprehensive warranty package that comes with it. And, sure enough, here you get a transferable, 7 year/100,000 mile warranty package shows the faith and confidence the company has in its products. There is also a 12-year anti-perforation and 5 year paint warranty to even further cement the longevity of the car. Servicing is every 10,000 miles. And insurance is rated at group 32 for '2' trim, group 33 for '3' trim and group 34 for a top '4'-spec car. Let's finish with charging time figures; from a 3-pin 2.2kW supply, charging a Sorento PHEV from empty to 100% would take 5 hours and 2 minutes. Use a 3.3kW AC supply and that time drops to 3 hours and 25 minutes.

This fourth generation Sorento tells us a lot about the way Kia is developing as a brand. It undercuts its Hyundai Santa Fe design stablemate on price and its extra polish and cleverness now make choosing this car a more credible option for buyers who simply don't need the dynamic advantages on offer from the much pricier Land Rover and German-branded models you might be tempted by in this segment. Plus, as ever with this car, while those familiar with the Amalfi coast might still feel the Sorento to be lacking an R, a glance at the spec sheet doesn't immediately suggest it to be lacking much else. In short then, for all kinds of reasons, this is now a contender you'd like - rather than merely one that would be very handy to have. The kind of SUV that might surprise you. As increasingly, modern Kias tend to do.