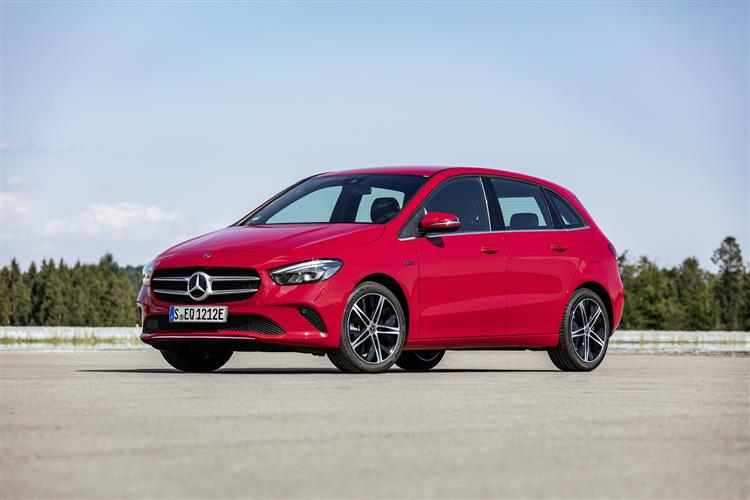 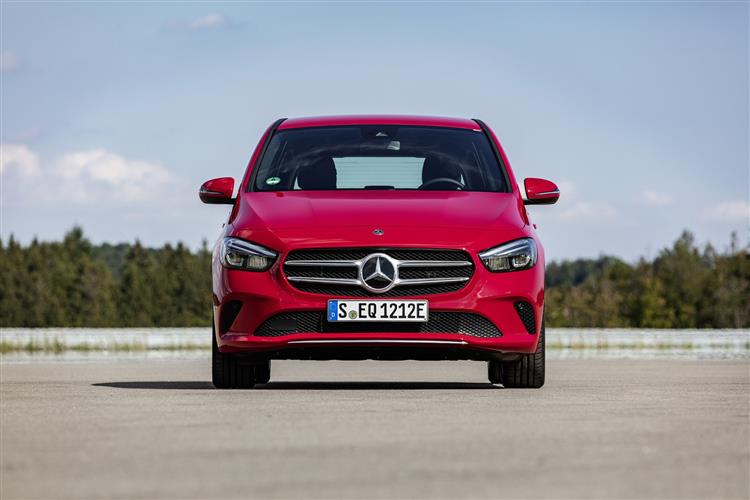 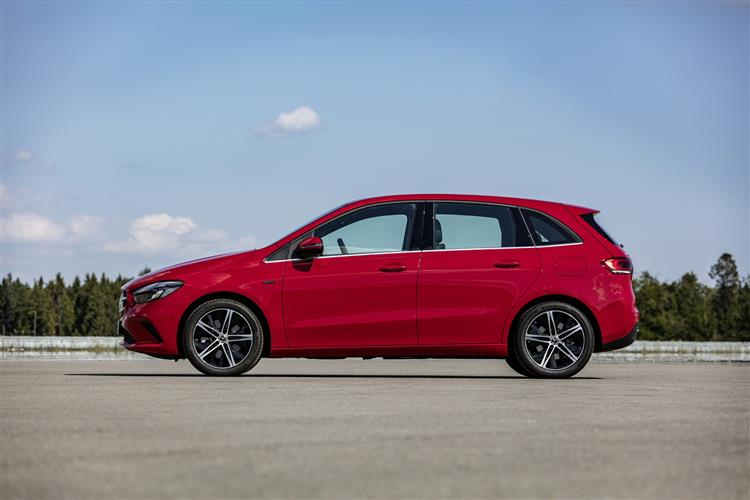 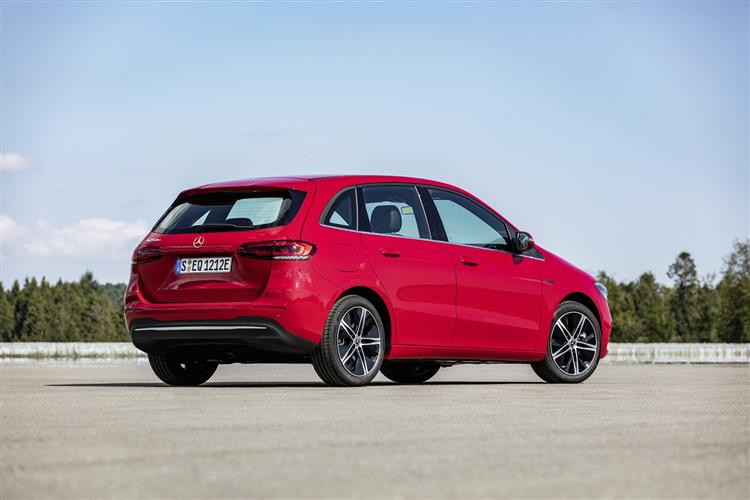 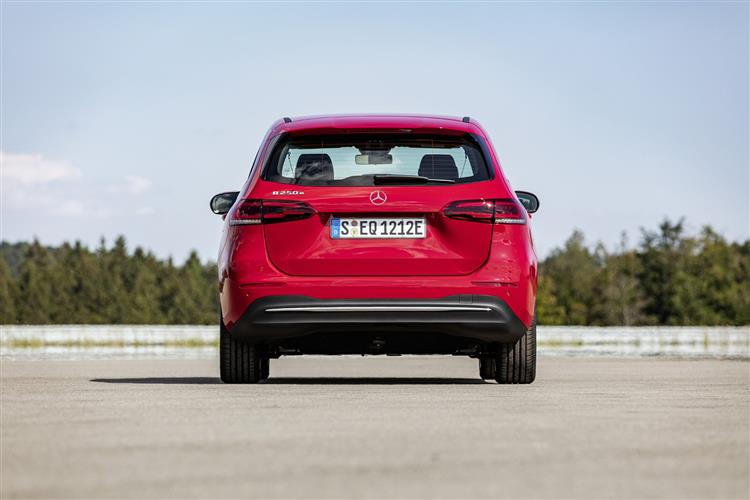 Yet another compact Mercedes plug-in model - but this one's aimed at small families. Jonathan Crouch checks out the B 250e.

Given that it's over half a decade since Volkswagen and Toyota pioneered plug-in hybrid technology in compact family cars, you could accuse Mercedes of a certain tardiness in bringing PHEV models to market - but then that's also true of other premium brands like Audi and Volvo. The Stuttgart maker's certainly making up for lost time now though, having introduced this tech to its GLA, CLA and A-Class models as well as to the car we're looking at here, the B-Class small MPV. The model in question, the B 250e, uses a plug-in powertrain set-up that right now just happens to set the segment standard. But can it justify a significant price premium over conventional petrol and diesel B-Class variants? Let's take a look.

Rather than electrify one of its older engines, as for instance Volkswagen did with the Golf GTE, Mercedes has here developed a much more bespoke unit, a 1,332cc petrol powerplant that manages to put out as much as 218hp. That figure combines the 160hp of this model's 1.33-litre powerplant with a 75kW electric motor linked to a 10.6kWh lithium-ion battery. These power sources collectively generate a pretty potent system pulling power figure of 450Nm. So, not surprisingly, performance is sprightly, 62mph dispatched in around 7s en route to well over 140mph. You have to have front wheel drive and an 8-speed 8G-DCT dual clutch auto transmission. Of most interest to a potential PHEV buyer though, will be this model's projected WLTP all-electric driving range - up to 42 miles. Obviously, you won't get anywhere near that figure if you regularly approach the quoted all-electric top speed of 87mph. An 'Electric' drive programme keeps the car in battery drive unless the accelerator pedal's kickdown function is used. In the 'Electric' programme, the energy recovery level can also be selected via paddles behind the steering wheel. The paddles on the steering wheel enable the selection of five different recuperation levels ('DAUTO', 'D+', 'D', 'D-' and 'D--'). The usual additional 'Comfort', 'Sport' and 'Individual' mode settings are also available. According to the given requirements, the driver is thus able to give priority to electric driving, place the emphasis on driving dynamics or give preference to combustion mode in order to save electric range, for example.

This B 250e's PHEV set-up is all very cleverly packaged. An innovative exhaust system layout explains the need for a relatively minimal reduction in boot capacity compared with a conventionally-engined B-Class model. The exhaust ends in a centrally positioned outlet under the vehicle floor, with the rear silencer housed in the transmission tunnel. Integrating the fuel tank into the axle installation space creates additional room beneath the rear seats for the high-voltage battery. Otherwise, it's much as it would be in any other A-Class and there's the choice of either hatch or Saloon body shapes. Visual differentiators as to this variant's plug-in status are limited to subtle badging. And inside, the cabin is unchanged, save for extra 'Electric' and 'Battery Level' menus in the MBUX infotainment system. As with any B-Class, in standard spec, you get a couple of 7.0-inch infotainment screens - one in front of the driver for the instruments and a centre-dash one for the infotainment functions. Pay extra and you can have both these displays uprated to 10.3-inches in size. And in the back? Well a 6ft 3-inch driver could sit behind his or her self, helped by the fact that the sportier roof line of this third generation model hasn't impacted on headroom; actually, there's 8mm more of it. Mercedes claims to have sculpted the centre transmission tunnel to make it easier for a third adult to be accommodated in the middle, but that feature is still quite prominent and the centre part of the rear bench cushion isn't especially comfortable. We mentioned boot space earlier: at 385-litres, it's 60-litres down on the 445-litre figure of the standard model.

Mercedes has priced this B 250e plug-in at about the same level as the top B-Class diesel, the 190hp B 220d, so you're looking at needing around £38,000 upwards. An 8G-DCT automatic transmission comes as standard, along with a 7.4 kW AC on-board charger. For trim, you'll need to choose one of three 'AMG Line' variants. There's 'AMG Line Executive Edition', 'AMG Line Premium Edition' and 'AMG Line Premium Plus Edition'. Standard kit across the range includes LED headlights, heated front seats and Thermatronic two-zone air conditioning. Infotainment's taken care of by a couple of 7-inch screens that feature the MBUX multimedia system with its 'Mercedes me' connectivity and the 'Hey Mercedes' voice-activated virtual assistant. 'AMG Line Executive Edition' trim includes 18-inch AMG 5-twin-spoke alloy wheels, privacy glass, an AMG body styling kit, ARTICO/DINAMICA sports seats with red contrast stitching and carbon interior trim. Plus there's front and rear parking sensors and smartphone integration, along with wireless charging and a 10.25-inch central media display.

The 10.6kWh battery can be charged with AC or DC current via a socket located in the right-hand side wall of the vehicle. This B 250e can be charged via its 7.4kW on-board AC charger within 1 hour 45 min from 0-100%. Keep everything charged up and Mercedes reckons that 90% of regular commuting journeys can be completed without using the petrol engine. One important comfort feature is the pre-entry climate control prior to starting a journey, which reduces energy usage and can also be activated conveniently by smartphone. The quoted WLTP combined cycle fuel figure is 256.8mpg and WLTP CO2 emissions are rated up to 24g/km. That means a 7% BiK tax rating; compare that to 30 or 32% for a conventional diesel or petrol-powered B-Class. The MBUX infotainment system assists the driver in finding charging stations. Just start a search simply by saying "Hey Mercedes, find charging stations nearby". Via the 'Mercedes me Charge' system, drivers of this plug-in hybrid model can optionally obtain access to one of the world's largest charging networks, with over 300 different operators in Europe alone (municipalities, car parks, motorways, shopping centres, etc.). Thanks to navigation, Mercedes-Benz customers can find these stations easily and can gain convenient access to the charging stations via the Mercedes me Charge card, the Mercedes me App or directly from the car. No separate contracts are necessary for this: apart from simple authentication, customers benefit from an integrated payment function with simple billing after they have registered their payment method once. Each charging process is booked automatically. The individual charging processes are clearly listed in a monthly invoice.

If you were shopping further up the B-Class range, it's certainly difficult to see why you'd buy a B 220d diesel variant for the same sort of money as is being asked here. It's just a pity that Mercedes doesn't feel able to offer this technology with lower, more affordable trim levels on this car. Still, you pay for plug-in sophistication and the 42 mile all-electric driving range figure is undeniably impressive car a car of this class. As usual with Plug-ins, there's lots to like about the PHEV formula if you can afford the asking price for it; superb refinement, clean emissions that lead to super-low BiK taxation and the appealing prospect of largely fuel-free commuting mileage. Ultimately, it's all about whether you can justify the up-front cost. But we still think this B 250e could make more sense than a conventional model once you add up whole-life costs on a finance deal. And in return for that outlay, you'll get a premium package in return.